Can we be super-honest for a moment, Babes tribe?

Truth is, when we decided just before Easter that The Babes Project should put on a forum to coincide with Mother's Day, we weren't sure what we were getting into.

But then, everything we do at Babes is about a taking leap of faith - with the right support in place, of course! So once we had the idea for a day-long discussion on empowered motherhood, leadership, and a better society for all women, there was no choice but to forge ahead.

And wow, aren't we glad that we did! The Rewriting Motherhood Forum delighted, informed, and most importantly inspired - and we can't stop thinking about everything we learned. 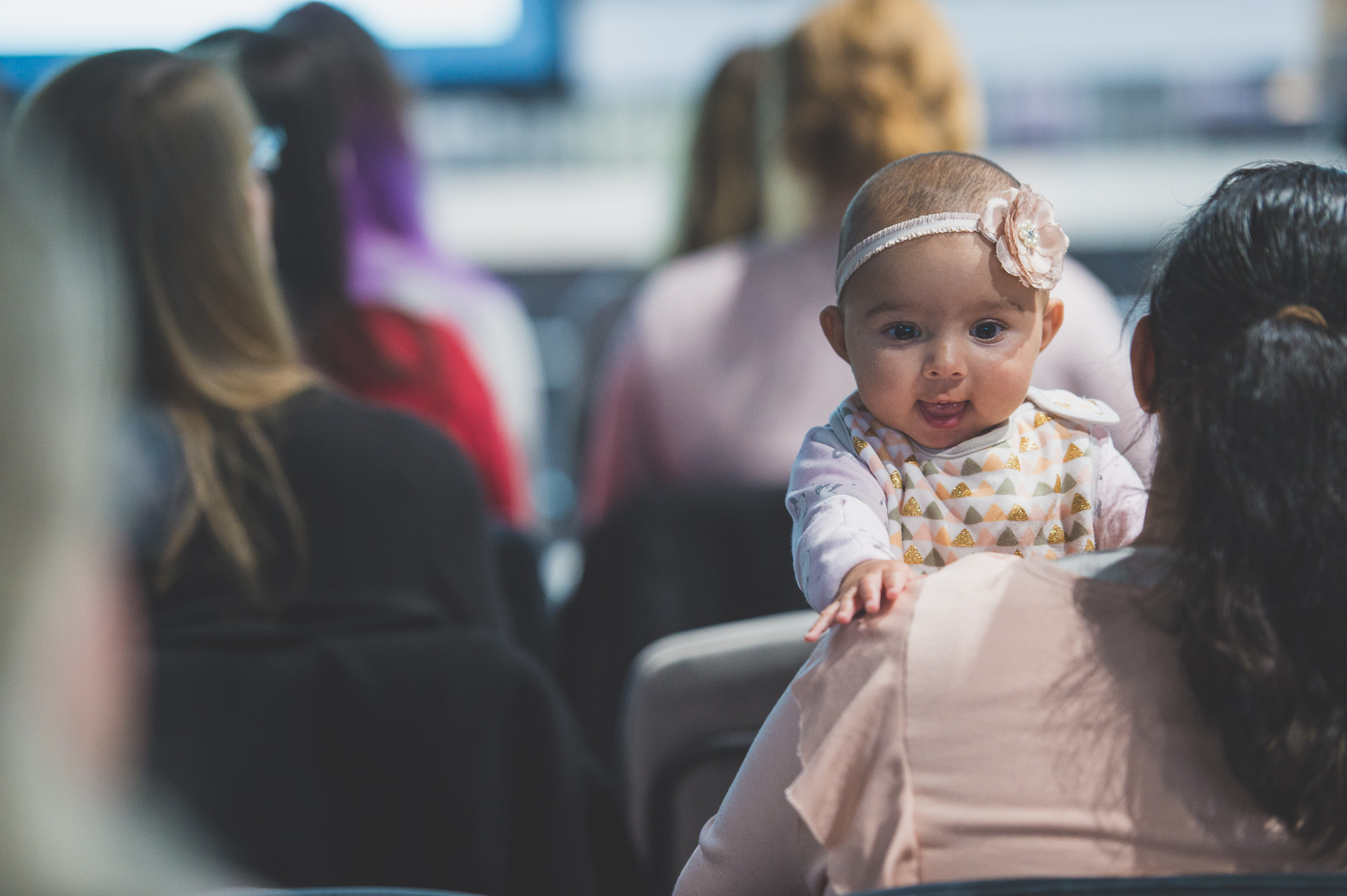 MUMS CAN DO ANYTHING! Babes bub Isabelle and her mama Vienna enjoy the Rewriting Motherhood Forum.

On Friday 11 May at the Waterman Business Centre at Caribbean Park in Scoresby, we gathered a room of 80 women (and plenty of bubs!) united by one goal - to start a new conversation about motherhood.

And honesty became a running theme for the day, as mothers from all walks of life showed up, stepped up, and shared their stories around the mama life, its challenges, and its huge potential for making an impact.

With MC and Babes founder Helen Parker leading proceedings, the full room was tapped into emotions early, as she shared a new video from Cadence Media that tells the story of some of our mamas. Filmed just a couple months ago, the mamas' accounts of overwhelm, exclusion, and ultimately love, definitely inspired a few tears. (Stay tuned - we can't wait to share it with you, too!)

The forum's first speaker was funny and moving Emma Race, creator of The Outer Sanctum footy podcast, of the Help Me Help You app, and, she explained, of "three incredible little girls".

Working in AFL and AFLW commentary, first as a female fan with her sisters and friends on the podcast, then for ABC Grandstand, Emma compared her professional realm to life as a mum. As Emma outlined, elements of blokey footy culture still try to shame and silence women with voices and opinions - but Emma's experience as a mum gives her motivation and focus to stand up to the bullies, and for a fair go on the field, and everywhere else. 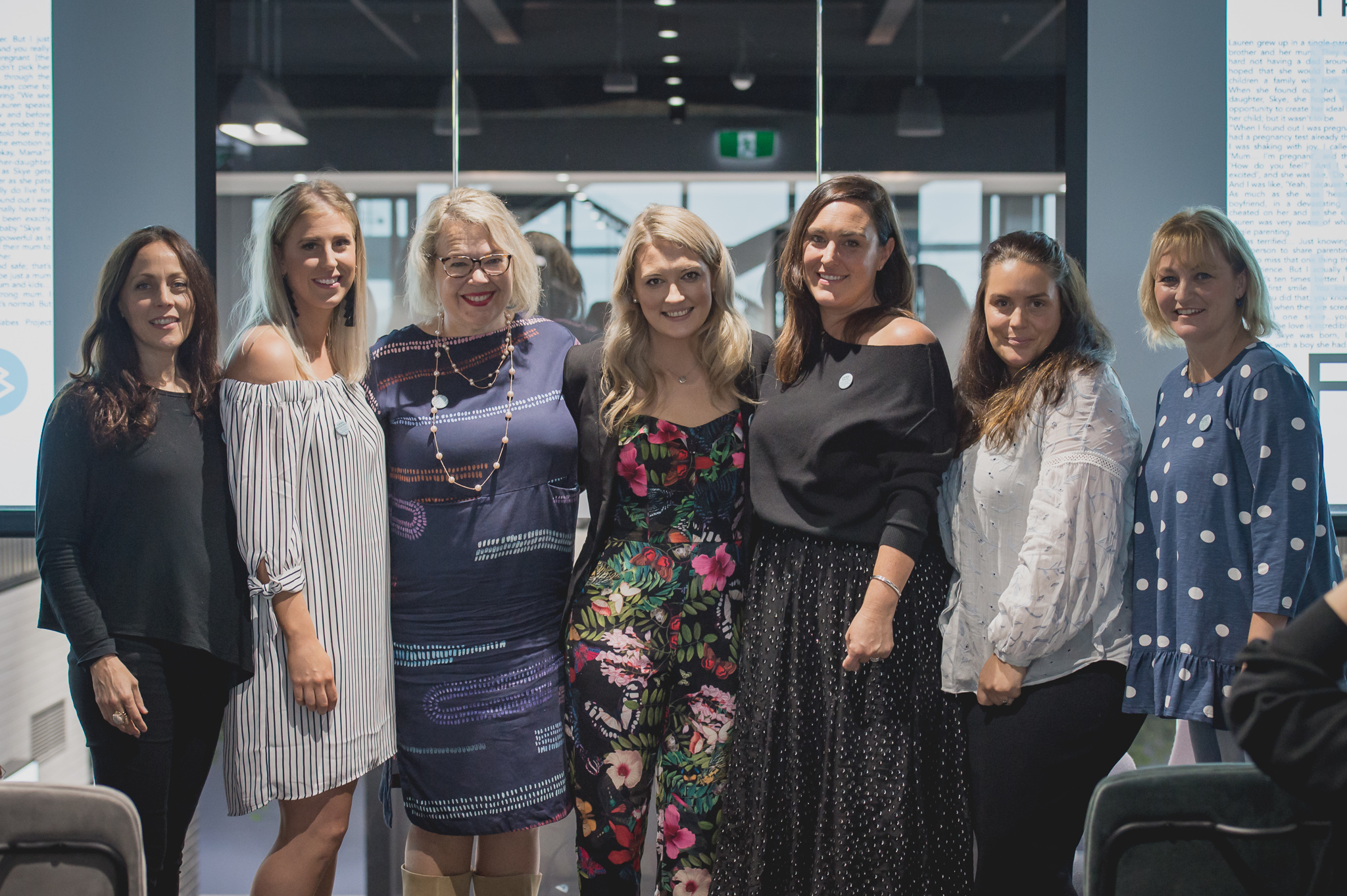 Next up, an inspiring line-up of women making a difference in not-for-profit and corporate worlds, moderated by Penny Johnston who created and presents ABC's Babytalk podcast. (She interviewed Helen and Babes mama Lauren this time last year!)

We heard from Sally Tonkin, former CEO of not-for-profit street worker support agency Gatehouse St Kilda, and previously self-professed "single girl", who's surprise pregnancy challenged how she defined herself, and how she approached changing the world.

Mandy Hose already had a career in supporting families as a sleep and settling specialist when she had her twin daughters, who arrived premature and with numerous health issues - and were eventually both diagnosed with Hemiplegia Cerebral Palsy. Months in neonatal intensive and special care followed, and Mandy described the overwhelm and trauma of the situation, and the counselling and support of others that "saved her life".

Marketing guru Cara Norden shared her experience of having her son and struggling to continue life "as though nothing had changed" - before changing jobs and finding a new perspective and balance as the marketing manager for women and mother-focused brands TOM Organic and Tooshies by TOM.

Founder of Sleepy Mumzzz support group for women struggling in motherhood and with post-natal depression, Emma Benninga shared her story of crushing lack of sleep, a late PND diagnoses, and the desperate search for other mums who understood what she was going through. The experience led her to form Sleepy Mumzzz as an online resource, and then develop face-to-face playgroups, workshops and special events for mums to connect and support each other - and helped her realise the extent of isolation that many new mums feel.

With encouragement from Penny, all four mums shared heart-wrenching stories - and plenty of laughs, too - as they compared notes on every aspect of motherhood, and what makes it work alongside career, community and life mission. 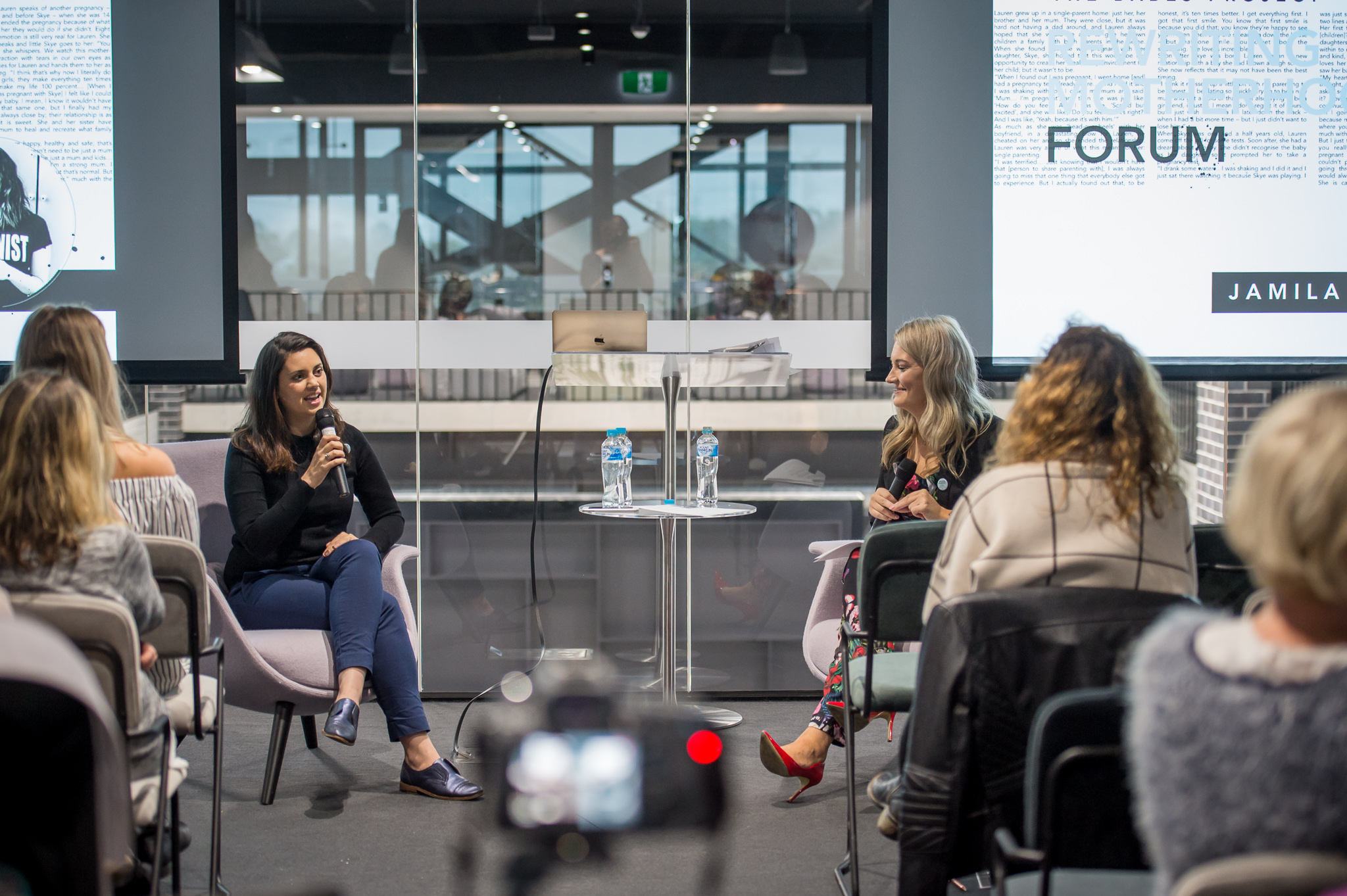 The conversation didn't stop for lunch, of course, as attendees tucked into delicious lunchboxes and shared their own thoughts and experiences around the morning's conversation.

And the afternoon continued to wrestle the big issues, as prominent feminist writer Jamila Rizvi joined Helen in conversation, explaining how having her son inspired her to collate The Motherhood, her new book featuring moving and hilarious accounts from high-profile first-time mums.

Jamila took on biases in the workforce and in the community that play down a mother's work, while deifying involved dads, and argued for a new way to talk about motherhood that neither reveres a mother's love, or focuses entirely on their drudgery. And there were plenty of laughs as Jamila gave her tips for working towards parental equality in the household - including mum putting herself as "parent number two" on child care forms, and not buying the birthday present for your partner's friend's kid (or at least pretending you didn't and waiting for the panic). 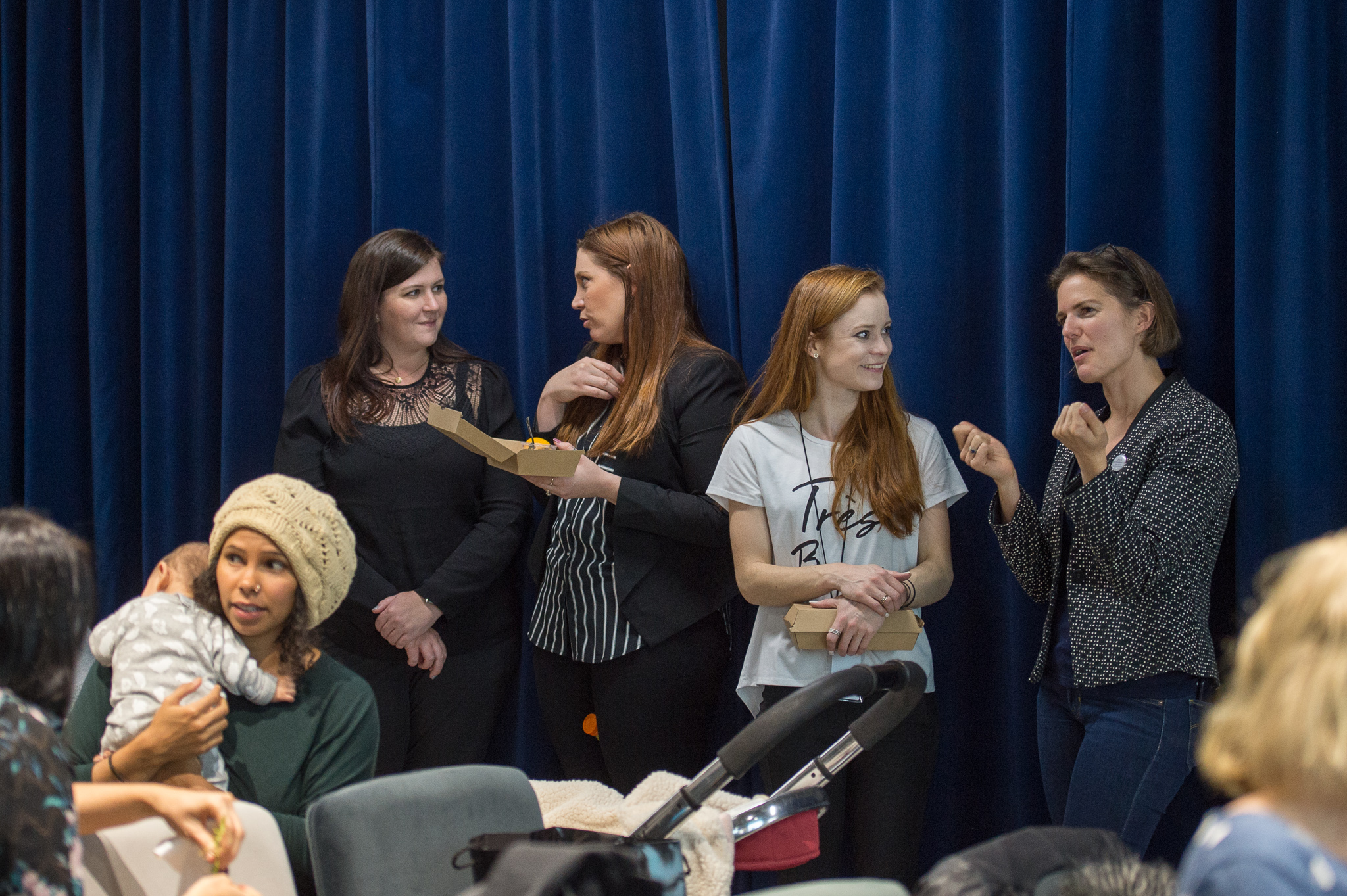 BEHIND-THE-SCENES BABES: Huge thanks and love (from left) Bec, Holly and Emma for everything you do at The Babes Project!

And of course, like any Babes event, the day featured plenty of baby hugs, gorgeous styling and enthusiastic Instagramming, and just so much love in the room for every mama on every kind of journey.

As usual, the event coordination was expertly done by Babes Special Projects girl Emma, with so much work from all the Babes team.

Big thanks to all our supporters - long-standing and brand new! - who showed up or event sent love on the day. The Babes Project can't wait to keep the conversation going - stay tuned!